The Games-Based Learning MOOC is coming to an end (technically, at least, but I’m sure that many of us will continue to share ideas and resources since the MOOC is based upon the constructivism learning theory and uses Lisa Dawley’s Social Knowledge Network Construction method). The last week also happens to coincide with my preparations to present on my use of immersive role-play and Second Life in my Spring FYC II class at my university’s CoRE Summer Academy. The focus of my presentation will be on the benefits of using immersive role-play in the classroom and the results of my own experiment with doing so. Since some attendees may be unfamiliar with gamification and/or games-based learning, I have included a brief overview of some of the most basic principles of both. What I have discovered in trying to summarize the two is that they are extremely complex concepts; I am having great difficulty reducing either down to a single slide of bullet points. I keep finding myself wanting to summarize everything I’ve learned in the MOOC over the past six weeks and to defend both as important and viable pedagogical methodologies, especially as I consider how the term gamification has become almost  a dirty word due to misuse and misappropriation of the term and the method. I know the kinds of reservations that educators have about buzzwords since I used to have the same reservations about gamification.

But the focus of my presentation is convincing my audience that immersive role-play can increase engagement and motivation and critical thinking, not defend gamification or games-based learning. But what if I had just ten minutes more in the spotlight. What would I say?

#1: Schooling is already a (poorly-designed) game

I’ve argued this before. The students know this. Some educators know it or suspect it, but either believe there’s nothing they can do about it or don’t care enough to do something about it. Some educators are incapable of understanding the fact that they are playing a game because they can play the game so well; they are, as a result, often bewildered by those who can’t or won’t play the game or who want to change the game because, as far as they’re concerned, “this is not a game!” (how often have you heard an educator say that?).

If schooling is already a game, then why not redesign it to be a better game?

In “Everything Is Game Design,” Elizabeth Sampat reminds us that just because something is a game doesn’t mean that it’s a good game; you can integrate all of the shiny, expensive, sophisticated components you can think of, “[b]ut if you don’t tie that stuff to the end experience of the player, you’re not going to have good design.” The reason why schooling is such a poorly-designed game is that the end experience of the player is not the primary focus of modern schooling. We continue to throw new, expensive, sophisticated pedagogical “tools” and theories into the existing game, while ignoring the players.

Instead of trying to stick a crappy, half-formed game onto real life, the real challenge— the one that’s tough, the one that will bring the greatest results— is to fix the bad game design that’s all around us. Finding the reward structures and the rules that are already in place, and figuring out how to make them more effective, is the key to making life better for everyone— not adding an additional layer of uninspiring mechanics that push us to engage with mechanics that already suck.

I think that every educator should have some grounding in game design before they attempt to integrate gamification or games-based learning into a classroom. After all, those video games that keep our kids so enthralled for hours at a time are not built in a day or even a week and they are often designed, created, tested, and debugged by an entire team of people with game design experience and expertise. While applying game design principles to a class need not and, indeed, cannot be that complicated, we can and should borrow some of the design practices from those who know how to effectively design games.

According to Lee Sheldon’s The Multiplayer Classroom, game designers typically use the Agile Development Model, which looks like this:

While it’s a complicated-looking model, it’s primary objective is pretty straightforward: “Iterate, iterate, iterate.” During the design process, you must constantly evaluate the game in terms of the primary objective (where you want your students to end up in terms of learning) and how effectively the game is guiding players towards that objective. In order to help you determine the last bit, you can use the Octalysis framework:

As the creator of the model, Yu-kai Chou, points out, different components of gamification can be used to either inspire or manipulate. If your goal is to inspire (as is, or should be, every educator’s goal), then you should lean more heavily towards the upper left quadrant, or white hat side, of the model. This quadrant favors ownership, accomplishment, meaning, and empowerment.

In addition to constantly evaluating the game throughout the design and creation process, you need to also be flexible during the gameplay, adjusting the mechanics and objectives to meet the needs of your students. And you must be willing to conduct a post-mortem after each iteration of the game and make the necessary changes in order to improve the game’s design. This may (and probably should) involve asking the game players for feedback. Here are screenshots of one part of the post-mortem for my Spring FYC II class: 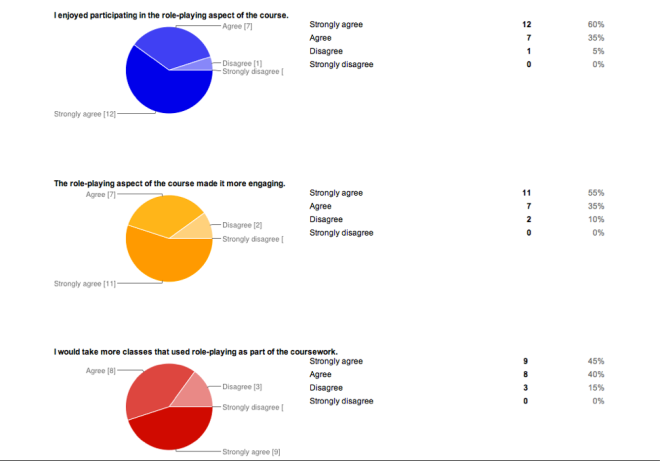 Far too often, non-gamers and sceptics of gamification and games-based learning assume that gameplay is all about extrinsic motivation: points, badges, leader boards, prizes, etc. But, as I’ve pointed out before, no amount of points can keep someone engaged in a bad game. One of the reasons why schooling is such a poorly-designed game is because it focuses too heavily on the ultimate extrinsic motivator: grades. Remember the characteristics of the white hat quadrant of Chou’s Octalysis model? Accomplishment is only one component of inspiring game design and points are only one of many mechanics that can be used to demonstrate accomplishment. The best games use multiple methods for measuring and reporting accomplishment. Simply switching from letter grades to badges does not equate with increased engagement; it’s merely exchanging one game mechanic for another. If neither the grades nor the badges are linked to a more important factor within the game and the player’s end experience, then both are equally bad design. Remember, gamification and games-based learning are about applying all of what we know works in the best designed games, not cherry picking magic band-aids and sticking them on an obsolete game in the hopes of encouraging players to have one more go at it.

Okay, so obviously it would take more than ten minutes to say all of this. That’s my problem and, ultimately, the problem with gamification and games-based learning: it’s not easy, quick, or efficient. Like the most well-designed games, applying game design principles to the classroom is difficult, time-consuming, and challenging. But, as many game designers argue and hard-core gamers know, without a struggle, the pay-off is not nearly as rewarding.

8 thoughts on “3 Things I Wish Everyone Knew about Gamification”