In my last post, I shared a video that compared learning to skateboarding; while this video has had a major positive impact on my teaching philosophy, I mentioned the negative impact that it has had on the control that I feel I have over the learning that takes place in my classroom:

I think that everything Dr. Tae says is true about learning. And it’s kind of scary because it means that there’s even less that I can do about my students’ learning than I thought. They all learn at their own pace, learning is not always fun for them (and if we think that we can make it fun all the time, then we’re deluding ourselves and setting ourselves up for failure), and failure is guaranteed (at least at first).

I thought that I would write a series of posts that address how I have remixed my classroom as a result of these realities. I now see myself less as a sage on the stage or even a guide on the side, and more of an architect. As Albert Einstein said, “I never teach my pupils. I only attempt to provide the conditions in which they can learn.” The first thing that is necessary for creating conditions for learning is allowing students the freedom, space, and time to practice (and failure needs to be both expected and acceptable, but that’s a topic for another post). It does no good to create the conditions for learning–a skatepark, to use Dr. Tae’s analogy–and then try to tell your students what they need to do and how to do it. And then tell them they get one chance to try it and if they fail then, not only will they be penalized with a bad grade that stays with them for the rest of their time at the skatepark, but they won’t get any further opportunities to try to master the trick (unless it’s by re-taking the class again next term) and they’ll have to move on to the next trick on the list of tricks they must learn, whether they’ve mastered the first trick or not. And guess what? The next trick is even harder and requires mastery of the first trick. This is no more of an effective way of helping students learn as it is to put your kid on a bicycle with no training wheels, tell them they’ve got one chance to get it right, and then give them a big push.

But just any old practice is not going to do. One of the characteristics of learning to skateboard is working at a skill or trick until you get it right, not half-way or almost there, but right. This requires a type of practice called deliberate practice, which requires both a focused and concerted effort on mastery of a skill and reflection on what worked and what didn’t work during each practice session. I often have my students read this article from Time on the role of deliberate practice in becoming a great musician and we discuss the similarities between learning to play an instrument (or learning to perform a skateboard trick) and writing. What the studies on deliberate practice make clear is that the most important thing about practice is not how long or how much you practice; it’s about being able to recognize what you did wrong and making a commitment to figuring out how to do it right.

And this is what I require my students to do with each of their writing assignments (which I now call opportunities because, at the skatepark, every session is an opportunity to practice with and learn from other skaters). Firstly, I use a portfolio system. This allows students some freedom from the pressures of being graded on each writing performance. It also means that I’ve removed the sticks and carrots from my classroom. If students do anything in my classroom, they have to do it because they want to. I refuse to bribe them into being there and doing anything they don’t truly want to do. Only hardcore skaters are allowed at my park. And, yes, that means that some students drop or opt out. That’s their choice.

The second way I have integrated deliberate practice into my writing classes is by requiring students to self-assess each of their writing “practice sessions.” I’ll discuss my method in depth in a future post, but basically each student has to answer a set of questions about their final draft that addresses what they think is working and not working in the piece. They also have to set goals for themselves for their next “practice session,” selecting at least one weakness in the current piece they will work at weeding out of their next draft (and, if necessary, the next one and the next one, etc.). I then focus my feedback around their assessment of the strengths and weaknesses of their writing and where they need to focus their deliberate practice efforts.

But what I really wanted to focus on in this post is allowing my writing students to have some deliberate practice with engaging in the academic conversation–the type of dialogue that I want them to have with the sources that they are integrating into their blog posts. By far the most effective method for teaching students the type of summary and response that all academic writing engages in that I’ve used is Gerald Graff and Cathy Birkenstein’s “The say/I say/So what?” method. But even with providing them with the templates from the book, my freshmen still struggle with how to effectively agree with someone (and disagreeing they won’t touch with a thirty-nine and half foot pole). So I designed a couple of different spaces  that allow them some deliberate practice with agreeing and disagreeing with their peers in preparation for agreeing and disagreeing with their sources.

We begin with a safe zone–the physical classroom–and a buddy system–peer groups–for testing the academic conversation waters. Students are grouped from the very first class meeting with 3-4 peers with whom they will stay for the whole term (I’ve considered the idea of rotating group members, as some instructors do, but once students become comfortable with each other, I think fear of failure decreases dramatically, so right now I’m opting for building a layer of protection with the peer groups). Their groups are where they will test out their ideas, bounce around arguments, and receive feedback during the entire process of brainstorming, drafting, revising, and publishing a piece of writing. I’ve spent quite a few semesters eavesdropping on the conversations that go on during these group sessions and am always surprised at how honest students will be with a small group of peers, especially once they have connected with each other and realize that everyone else is just as lost as they are when it comes to this academic writing thing.

Once students are pretty secure about their ideas and how best to communicate them, they publish their piece on their blog. I won’t spend time here discussing the benefits of having students blog. There are pros and cons and I have weighed them both and tried various methods and have had overwhelming success with public student blogs, both in terms of the quality of the students’ ideas and their writing and in terms of the feedback from the students on the positive impact of blogging on their feelings about writing. Among the many reasons why I require my students to blog, one is the dialogue that it creates around the students’ own writing. That’s the whole purpose of a public blog–to generate a discussion about an issue or topic. How much more exciting do you think students find it that their writing will be read and discussed by their peers rather than unceremoniously tossed in the trash after a cursory once-over by their profs? Just ask your students this question and see what happens. And if it doesn’t excite them, then you need to find something that does and that may not involve blogging (but that’s okay, there’s other ways to skin a cat).

The point of publishing their writing on their blog is so that the entire class has an opportunity to read what they have to say and respond to it in some way. So I require students to read and respond to at least three peers’ blog posts each week (I’m currently trying out a system of rotating students between the roles of bloggers and readers/commenters; I’ll let you know how that turns out and whether I’ll make it a regular practice or not). I give them some guidelines on how to comment on a blog post using a handout on commenting in online discussions that I found online and remixed to focus on blog comments. And then I let them practice–deliberatively. And I model effective blog commenting by commenting myself (more on the importance of role models in the skatepark later). One thing I’m trying out this summer is having students use Storify to create annotated bibliographies for their research, embed their “stories” in their blog, and then read and comment on each others’ bibliographies. So far, I think it’s working. Here’s a snippet from the comments on a student’s annotated bibliography post: 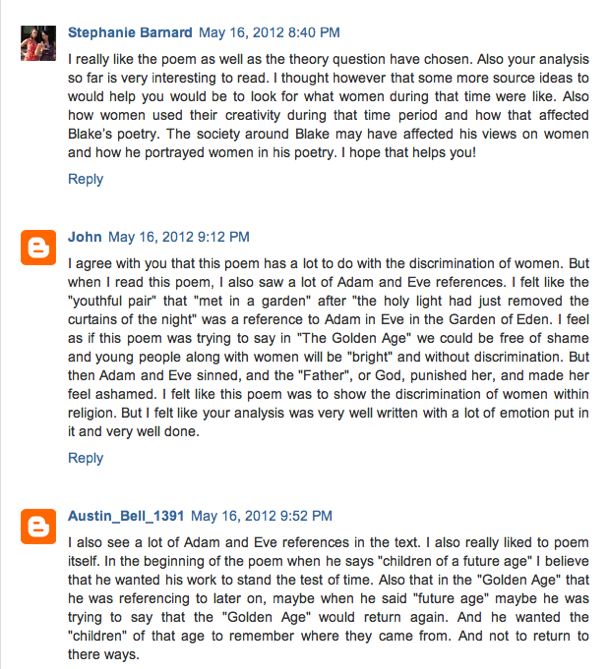 There are a couple of things going on here (all good, I think). Students are practicing agreeing and disagreeing with each other and they are providing feedback on the reliability and relevancy of research sources. The hope is that they will internalize these assessment skills and learn to apply them to their own research and writing practice.

That’s my hope, anyway. I don’t expect these kinds of comments from every student with every blog post. Some will get it faster than others. Some will not get it until the very end. Some may never get it (but hopefully will down the road if they get another instructor who’s willing to provide them the chance to try). And that’s okay. I’ve provided them with the space to practice in, some guidelines on how to know when they’ve got it right, and the freedom to try and fail as many times as they need to to get it right. If they learn anything, I hope it’s that it’s okay to suck at something when you try it the first time and that it doesn’t mean you can’t get better at it, and maybe even great at it, with a little deliberate practice.

I’m interested in how others are integrating deliberate practice into their classrooms and which methods you’ve found effective and ineffective. So, please share your ideas, stories, and questions. After all, students aren’t the only ones who benefit from deliberate practice.